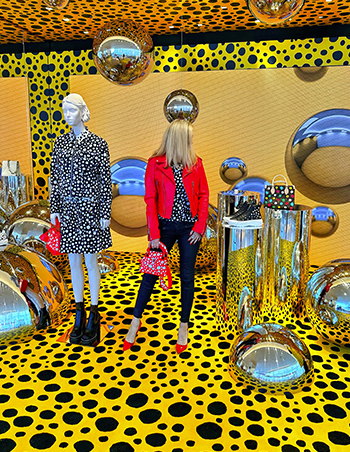 The Princess of Polka-dots is Back (and it’s not me!) 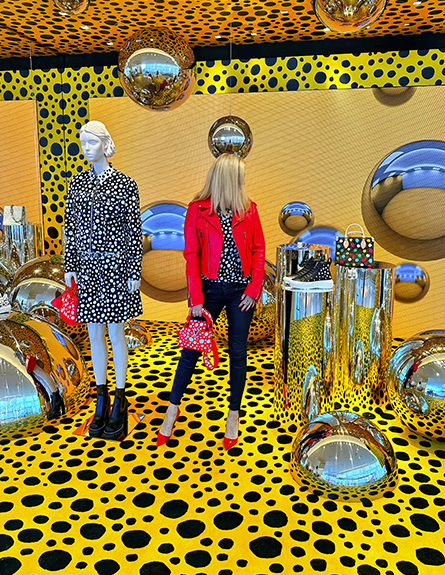 I’m not the only one who’s wild for polka-dot punk, but that’s just what Yayoi Kusama brings to the table with her latest Louis Vuitton collaboration.

Although many of us knew this new collection was coming – I remember it being ‘teased’ during Nicolas Ghesquière’s fashion show at Salk Institute San Diego in March of last year – Louis Vuitton’s recent fashion reveal features their latest collection of old favorites with a twist: the signature motifs of avant-garde Japanese artist and inspiration, Yayoi Kusama!

Needless to say, I’m raving over the result–and have been waiting since 2012’s collaboration to get my hands on more of these awesome works of fashionable art. Not to mention, I revere any artist who shares my adoration for all things polka-dot, so this collection gives me a chance to add more playful accessories, clothes to my rotation thanks to Kusama’s deeply joyful, modern, yet measured designs and patterns alongside LV.

So, to help share my reverence for this great artist, designer, and model, I thought I would pay a little tribute to Yayoi by sharing her unique story and outlook with you, plus a little bit about my favorite exhibitions, installations, and fashions from her. If you didn’t already know what a whirlwind person this woman is, then you’re about to find out:

She grew up in Japan and by the time she was just ten years old, began to experience transmissions or hallucinations that soon began to inspire her artwork. Drawing flowers that apparently spoke to her, she began to draw under the stern eye of her mother, who did not approve of young Kusama’s creations.

Still so young, the vivid imagery of these ‘flashes of light, auras, or dense fields of dots” would speak to her or reflect in 3D around her while waking, and later inspired her work.  She also credits the smooth formations of round polished stones on the bed of the river near her childhood home as an inspiration for her polka-dot designs.

Yet, when Kusama left Japan in 1957, she destroyed many of her early works, and began to explore America’s avant-garde movement from her new home in Seattle, and then in New York City. By 1960, she was creating an uproar in the art scene with far-out works that fought against the things she reviled most at the time, like commodification, womanizing, and the Vietnam war. For example, she once wrote a letter (and published it publicly) to Richard Nixon saying that she would have sex with him if he would end the occupation in Vietnam!

Although her work was famously successful in the years in between, by the early 70s Kusama returned to Japan. She had grown ill, and began to pour out different written works that some have called ‘shocking’. By the end of the decade she had admitted herself to a hospital for the mentally ill in Japan. She resides there to this day, though at 93 years old she is still producing work in a studio just a few blocks away.

Although I most know Yayoi through her work in fashion, her most iconic signature (her enigmatic polka dots) usually appears in a repetitive variety, and rarely if ever is one seen on its own. As such, these polka-dot motifs can be seen all across her entire body of work–whether in two- or three-dimensional space.

Perhaps her most recognizable (and one of my favorite of her) ‘polka dot’ work was her “Narcissus Garden” exhibition, staged outside of the Venice Biennale in 1966. Without being invited to the event, she stood outside the gates surrounded by a ‘kinetic carpet’ of 1500 mirrored spheres. As the day wore on, she sold the spheres one by one for $2 each. Depending on how you look at it, the work had much to say about connection, projection and commodification (of art), and was itself rebellious. Event organizers eventually caught on to what she was doing, and stopped the ‘show’—adding to the appeal and mystique.

From there, her work has continued to thrive across all mediums, including brightly colored artwork that her collaborators say “plays with the paradox between the short, ephemeral life of a flower, and the infinity of endless dots”. Many others just call it like it is: and say the polka-dots (and her unique obsession with pumpkins) appearing in her work symbolize ‘playful psychedelia’.

My own impression of her grand artfulness is that somehow, in every pattern, we can find both joy and separation; both the one, and the many…and I think it’s something in that which continues to capture us all as we look at Kusamas work almost 60 years later.

By the late 1960s Yayoi had established herself as not just a magnificent artist, but also a fashion designer. It was around this time that she established her own fashion company, soon on show in Bloomingdales’ “Kusama Corner”, and from there absolutely blasted off with outlandish, yet incredible fashion designs into the new millennium. From cellphones to limited-edition lip-gloss, Kusama’s fashion designs have always been deeply recognizable to those who know her, and her sincere attitude towards art bleeds through into everything she touches. She’s even worked with fashion icons like Marc Jacobs and Louis Vuitton–which is how I came to discover this powerhouse designer from across the world.

As I said, I first saw Louis Vuitton and Yayoi Kusama collaborate on a series of leather goods, accessories, and other fashion items in 2012…and I haven’t stopped thinking about it since!

I’ve been googling release dates daily to see if there would be any early drops, and although I had to wait for the official release on January 6 this year, I didn’t let that stop me from heading down to the store right then and there to experience the glamor for myself…as well as the effort and art that always goes into displaying Kusama’s incredible work. Her collections and their display are as much an exhibition as any art gallery show–and it’s all the more reason to adore the experience of seeing what her work has to offer through a retail fashion experience. In fact, Louis Vuitton went ahead and transformed many of their shops across the globe into fabulous, sci-fi-esque installations that feature everything from a sky-scraper-high video, to a robot, and even a huge, life-size Yayoi sculpture in Japan!

I was lucky enough to hit up the Beverly Hills location, where the shop explored Kusama’s theme with mirrored spheres that remind me of her early Narcissus exhibition, all hanging amid a bumblebee polka-dot motif that made me feel at once like a rock-star, a space explorer, and just a happy kid at an amusement park–which I totally was!

And I’m just as happy to report that the collection does NOT disappoint!

From the bauble-studded space-core jackets (studs are applied by hand), to the 3D dot motif on bags and clutches, to the colorful polka dot skirts and shoes with a realistic hand-painted effect, there is absolutely something there for everyone to enjoy.

Amid the space-playground exhibit, I would even say the whole collection felt like going back in time; like looking at the amazing work LV and Kusama have done together, and how they’re celebrating it now only 10 years later.

Perhaps my favorite element of this new show, though – especially with my new interest in technological futures and biohacking – was the way all collaborators for these designs came together to create artistic experiences that extend beyond fashion.

Not only do they have a signature filter you can use to Kusam-ify your reality, you can even play the LVxYK game on the app store! These new-fangled experiments with fashion and technology are (I think) really showing up for me as foreshadows of where fashion will be going in the next decade.

These days, it’s hard to deny that Kusama’s work and influence has leaked into every art industry you can name, as well as my life. Yayoi herself describes the style and effect her polka-dots have as “Kusama Art”. Her work is so iconic that she is said to “have the highest turnover of any living woman artist”, and has even set records for being the most expensive living female artist at auction as early as 2014.

Even today she is creating art, including surreal paintings and illustrations depicting different kaleidoscope faces and cellular shapes, which makes this collaboration with one of my favorite design houses all the more special. In context,the LV + Kusama collaboration starts to symbolize the universal nature of Kusama’s inspiration on its own, and how it affects us all.

But I get away from myself!

Yayoi’s work always makes me want to philosophize, and I’m sure it gives you the same feeling. So without getting too lost in it, I’ll leave you today dear readers in the hope that you’ll visit a store location near you (or the Yayoi Kusama Museum if you’re near it) to experience for yourself a mind-bending, exciting, and conceptual fashion experience you aren’t likely to forget! 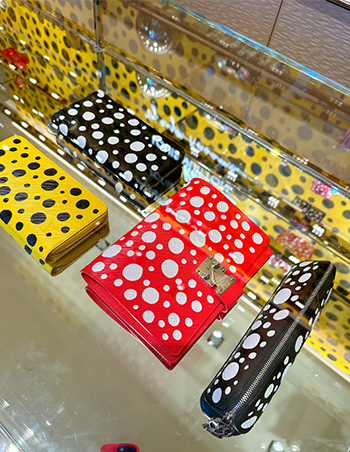 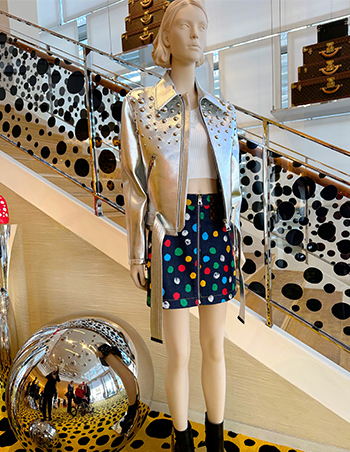 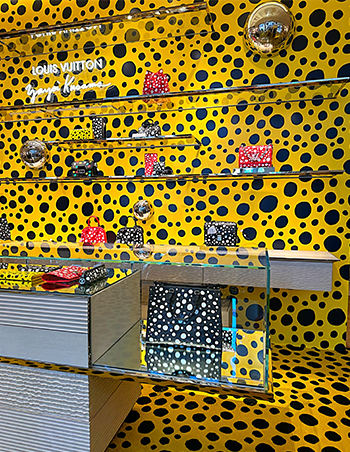 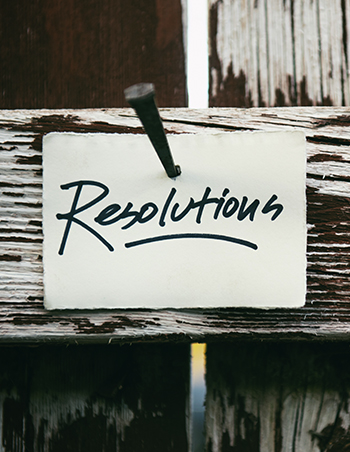 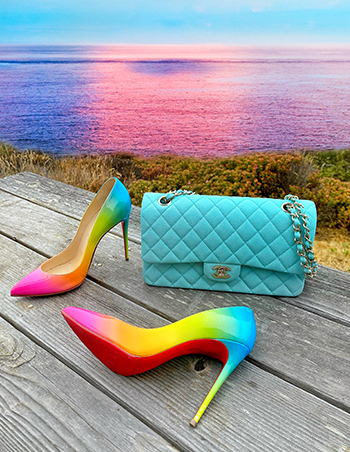